When I was growing up in Singapore, I had a pretty clear idea of what I wanted to do—or what industry I wanted to be in. And that was music and entertainment. As I got older, the dream got bigger.

At 15, I wouldn’t have been able to foresee everything that has unfolded over the course of my career so far. I grew up in Boon Lay—or Jurong West as they call it now—in a small one room HDB apartment. My family was always in each other’s faces.

Now, I work with TaP Music and manage the careers of artistes such as Lana Del Rey, Dua Lipa, Ellie Goulding, Hailee Steinfeld, Dermot Kennedy, and more. Headquartered in London, I oversee the US office and work closely with our artists across their music, touring, and brand partnerships.

My earliest memory of music is my dad hoisting me up so I could put in ABBA’s Dancing Queen in the music player. I was always obsessed with music. Even today, if you go to that HDB flat in Jurong West, you can hear music blaring out of my parents’ apartment. My mom has always insisted on listening to music on the loudest volume, and she still does it.

But while music was always a part of our family, any Singaporean can imagine that my parents were shocked when I told them I wanted to be in the entertainment industry. That was not seen as a real job, especially not for a young Asian woman at the time. It wasn’t ‘desirable’ or ‘respectable.’

In school, I wasn’t the coolest, smartest, most talented or prettiest girl. I was more aloof if anything. But I knew I wanted to see the world. I wanted to experience more. I didn’t think I could do everything I wanted to do if I stayed on in Singapore.

I have a lot of friends who decided Singapore was their home, and I don’t blame them for it. It’s a great place to live. But I am nomadic by nature. Growing up, my dad was a customs officer, so I moved around Malaysia and in Singapore a lot. It made it easier to start over. I used to love the clean slate, the fact that you can be whoever you want.

I realised I had a real chance at this job when I joined Ngee Ann Poly, because I had always hated school until that point. I was studying mass communications, and I was finally interested in what I was learning. I got to be part of a radio station on campus and learn about PR and advertising.

My brain lit up and I thought: “You know what, I may not be the smartest person but I am good at this. I can figure this out.”

Anything before that—the physics, algebra, and so on—were just not me. And that’s when I realised I could pursue my dreams.

That realisation made me believe I could pursue more than just what society expected from a girl like me. I hated the rat race, I wasn’t comfortable chasing all those unattainable things you are meant to want, like going to the best JC or to the best uni. If anything, it stifled me because the things I crave for in my life aren’t the condo or the car.

I didn’t really care how it would happen, but I wanted to experience life and do different things and meet different people.

was working in BMG Music when the desire to leave Singapore came.  I went on a business trip to Hong Kong and everything changed. I came back home and decided I had to move there.

And I said, “Of course not just like that, but I’m going to figure it out.”

I was laser-focused but I knew I needed to take baby steps. New York City wasn’t even part of the plan yet, but it would soon be.

Hong Kong was my first move, my first apartment, first everything. Growing up, I shared one bedroom with my brother and two sisters. And suddenly, I had all these things that were mine. I would wake up in the morning and look at the couch and think, “That’s mine, I paid for it! And that’s my bed, I paid for it!”

It was those little things that made it all worth it.

After 4 years in Hong Kong, I moved to New York City in 1999. I was there for many years, and I started travelling extensively.

Within two weeks of starting my job, I was doing marketing for P. Diddy (aka Puff Daddy) and a bunch of other rappers that were big at the time. I wasn’t exposed to a lot of hip-hop or rap growing up in Singapore, so I was thrown into the deep end. I had to learn everything on the fly, but I managed to figure it out.

I’m good with people. I know how to put myself in the artiste’s shoes, and find solutions. Half the time I felt like a babysitter. The artists would often feel vulnerable when they’re outside of their home territories, so I had to make them feel comfortable in order for them to accomplish what they are there to do. And I can identify with that. Coming from Singapore, I felt so out of place at times.

I used to hate being a foreigner, but i’ve grown to love being a non-American in the US. I definitely went many years feeling nervous about speaking in meetings because of my Singaporean accent—which has never left me. And even bringing food from home to the office, and heating it up and getting people saying, “Ew, what’s that smell?”

But now, I believe it’s my most Singaporean qualities that have helped me become successful, like my persistence, hardworking attitude, and good humour.

Also, the multicultural and multilingual element is more important than most people realise.

When you grow up speaking a few languages and mixing with different cultures in a place like Singapore, it really sets you up well to be more open to new experiences and people.

In the US, I haven’t encountered any Singaporeans in the entertainment industry, unfortunately.

There are more Singaporeans in finance, engineering, biotech, startups, and so on. I think that may be because living abroad is not considered a valuable experience in Singapore. But ultimately, I think it’s important to leave your nest, even if it’s just for a while. I don’t know how far you can open up your world if you stay in your little pond.

This is true especially in music and entertainment, where there are lots of talented musicians, music and film executives in Singapore. Clearly, Singapore is a force to be reckoned with. But a lot of these people would have likely spent a considerable amount of time overseas to broaden their horizons.

Maybe people are scared of moving abroad and losing the ‘comforts’ they have in Singapore. I see my friends, they have helpers and a great life. But if you live in most other countries, that is not an option. Life abroad can be challenging, and it certainly was for me. Especially at the start. I had to deal with really shitty things to get ahead.

But it’s all worth it because it changes you as a person for the better. Personally, I’ve seen my perception of success change from each of my overseas opportunities. Before, it was just about moving abroad or scoring that one job. Now, it’s about learning and growing from experiences, but also finding that elusive work-life balance.

But in the same way that I have built my place here in the US, I can understand why other professionals would move to seek opportunities in places like Singapore. So to me, the anti-foreigner sentiments in Singapore don’t make sense.

As a ‘foreigner’ in the US, I never took an American’s job. If you are working somewhere, it’s because you bring in talent and brain power from outside of the country. It should be a level playing field, but it should also be the best person for the job.

I prefer looking at individuals for their own stories, rather than categorising them under umbrella terms like ‘local’ or ‘foreigner.’ I got to where I am because of where I came from, and no one can take that away from me.

When I think back to where I come from, I am surprised that I did it. I’ve circled the world a few times over and I still love going to new places. Music allows me to do that, nothing else.

I earned my place to be in America, and that should be the same for anyone anywhere.

Wendy Ong was a speaker at All That Matters, a yearly music and entertainment conference in Singapore.

This article was originally published by Rice Media here. Rice Media is a digital magazine that publishes original stories and perspectives on contemporary Asian culture. 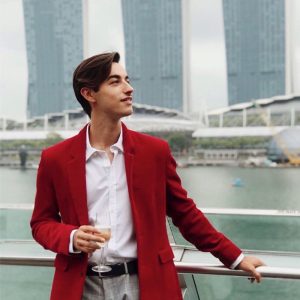 Although Italian, Edoardo was born in the US, raised in Singapore and completed his degree in International Relations in Sydney. Since then, he has been working in the field of content creation—writing, video production, hosting, and social media strategy.