Lockdown Cooking: For both circuit bakers and circuit eaters

In the very first of our three-part series on Lockdown Cooking, Lim Monica Devi, a Singaporean in Belgium seeks out the Singaporean community around the world to share a common love – food! Over the next few months, she will be speaking to them about their journeys and joys during the global lockdown, including their favourite dishes to make and memories of the Little Red Dot. Dig in as she rolls out this month’s flavours: baking recipes. Start with the truly simple one-pan, rise to a cake made without an oven, then crank up the heat with a slightly more complicated braided beauty. The recipes here will entice both circuit bakers and circuit eaters!

“The NTUC ran out of cakes! My oven was not working either. Panic!!” a friend remarked over WhatsApp recently.

We were texting about how she had celebrated her husband’s birthday during the lockdown. It was a special year: Ban Kwok had turned 50. Under normal pre-COVID-19 years in the past, they had held parties in restaurants with family and friends joining in the celebrations. This year, it was a more intimate, if somewhat haphazard, affair.

Soo Leng had already scratched the idea of a large celebration in a restaurant. But it was a special milestone year which still called for a celebration of sorts. Like for most people, blowing out candles on a cake was the minimum.

On the morning of Kwok’s birthday, Leng went to the neighbourhood bakery. A fresh cream cake with strawberries, she thought. Just something simple. But for some inexplicable reason, the bakery was completely out of cakes that day.

“It was just 11am, Mon,” Leng recounted. “Not even a special day – not Mothers’ Day or Fathers’ Day or something like that. It was just another stay-at-home lockdown day.”

Following her cakeless trip to the bakery, Leng went to the nearest NTUC supermarket to see if there was a simple pandan cake that she could pick up and decorate with berries at home.

“All the shelves were empty lah! Everything gone!! I thought it was only toilet paper that people were hoarding.”

Leng made her way home, feeling mild panic. Not wanting to disappoint her family, especially her sons whom she had convinced to create papercraft decorations for Kwok’s party, she phoned her cousin Jen who lived nearby to ask for help. Jen had never baked in her life but was willing to try her hand at making cupcakes, and agreed to deliver them to Leng’s doorstep as well.

This started me thinking: what about those of us who lived far away from family? What would we have done? I decided to get in touch with the Singaporean diaspora to see how they were coping with the quarantine measures and their approaches to “lockdown cooking”.

Baking seems to be the number one new activity that, wherever we are in the world, we all seem to have tried our hands at. As late as April, nearly two months after many countries went into lockdown, there were still news reports of supermarkets running out of flour. Plain, self-raising, wholemeal, spelt… the shelves across the world emptied as quickly as they were stocked. It looked as if for once, the world was in agreement: baking was an essential part of “lockdown cooking”.

Mashizan Masjum, who runs his own luxury footwear brand in Paris (France), confessed that he had never baked prior to the confinement. “While I cook a lot, I always find baking daunting. You need to be precise and there seems to be no room for error. But with the confinement, I’ve learnt that baking is as much an art as it is science. I recently made an ondeh-ondeh pandan cake after seeing a picture posted by a friend on Facebook.”

Indeed, supermarket runs became a literal run to the baking section to pick up bags of flour before they vanished or to the cooler section to pick up ready-made pastry (yes, a few of us are given to “efficiency” like that!). Into our trolleys went yeast, butter, eggs, baking powder, chocolate chips, whipped cream, sugar, and all other manner of baking necessities that would make us the pastry star of our own bake show on YouTube.

Very soon however, this activity became more like the BBC’s “The Great British Bake Off” with acquaintances posting their baked beauties – with the more daring ones posting their flops – on social media for all to see. And of course, there was an element of one-upmanship. Posts with hashtags like #artisanbaking #sourdoughlove #realbread started appearing on our social media feeds, replacing the original envy-inducing #travel #holiday #destination.

Be it sourdough bread or chocolate cakes, or even a basic banana bread, nearly all of us were rolling and dusting, then keeping our fingers crossed that no smoke alarm would go off in our kitchens. We then presented our creations to the critical (and only) judges: our family.

Dora Yip who moved with her husband to his hometown in Dunedin (New Zealand) recounted the success of a recent bake. “The best thing I’ve made in lockdown – from an audience reaction perspective – is a simple Jewish challah bread. My kids rated it 100 out of 10. It was that good! I made it as part of a #breadsoftheworld challenge. The braiding of the bread is very calming and therapeutic. We eat it fresh with anything, and the next day, it makes the best French toast.”

Sometimes, even when our ovens break down, we find a way to produce a cake. This is just what happened to Yan Teo-Maya, in El Retiro, Antioquia (Colombia). Owner-chef of an Asian restaurant, Yan used the extra time that she had during the crisis to experiment. “I found new and creative ways to bake. I tried to use existing recipes and steamed them instead of baking. Banana cake and chocolate cake was a success. Steaming results in a much spongier and softer texture compared to traditional baking where the cake turns out drier and denser. I also baked matcha green tea biscuits and chocolate chip cookies using a steamer (dry method).”

If you are not the best of friends with flour however, don’t despair. There’s a recipe for everyone! Even if you keep a vegan kitchen and have to look after a toddler while working from home. Grace Lee, who lives in Philadelphia (USA), wanted in on the fun. “Everyone was baking at home more. My husband started making sourdough and we’ve been eating his bread for most of our lunches. We’ll have it with mashed avocados, or a side salad, or just with jam and peanut butter. Recently, I came across a really simple and easy pan chocolate cake recipe to make with my daughter. It satisfied all our chocolate cravings.”

I hope that this month’s recipes will appease some of your cravings too! Next month, I speak to more overseas Singaporeans about how they coped with the lockdown, and bring you some of their cooking hacks. 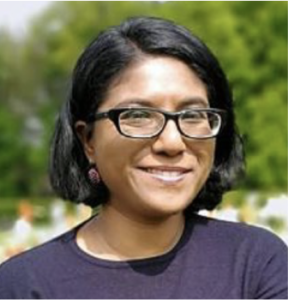 Whether it’s listening to one, imagining one, one or dreaming one up, Monica spends a lot of her time seeking and shaping stories. If you’re just as fascinated by the merging of worlds and cultures, from fusion cooking to going glocal and phygital experiences, talk to me at ibrisa7@gmail.com